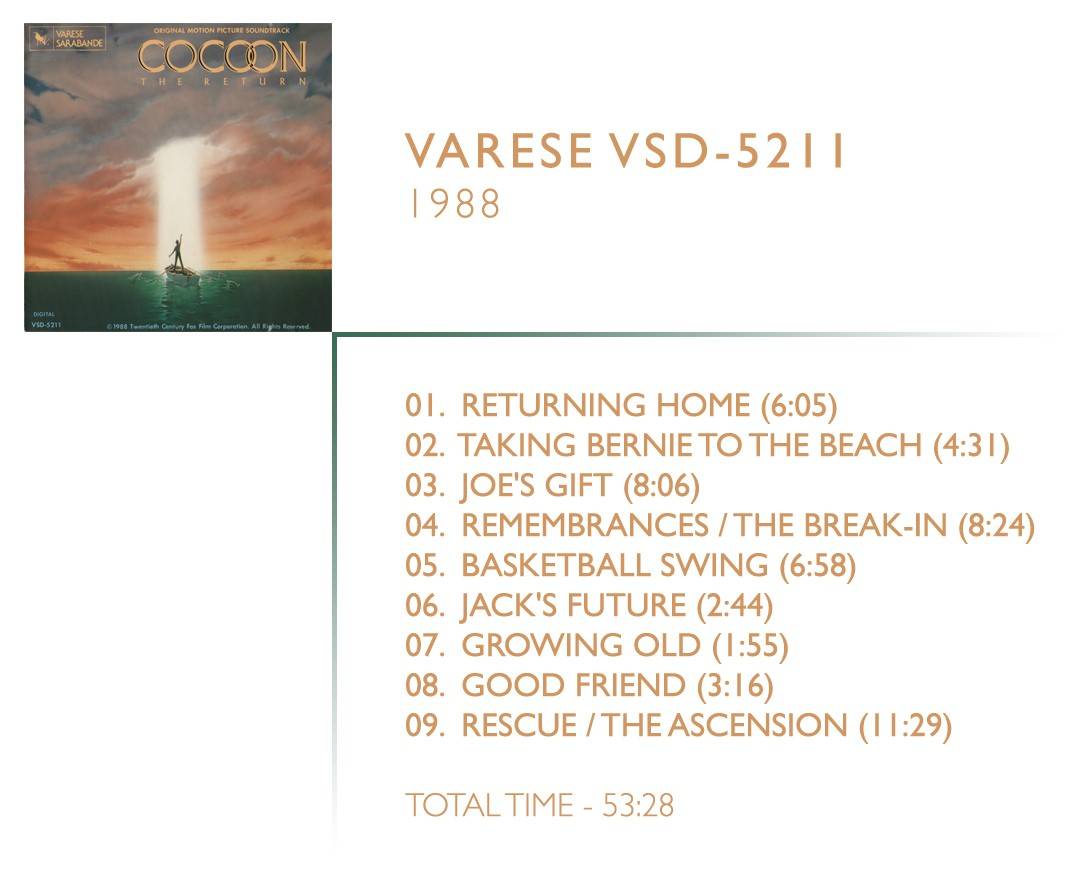 As we announced previously in our article dated 19 February, we anticipated a new edition of Cocoon: The Return would be forthcoming for the year 2016. The wait was very short because only 10 days later Varèse Sarabande confirms this new edition (2500 copies) and reveals its contents.   After the extended edition of Cocoon released in 2013 by Intrada, here it is the sequel album that enjoys a makeover. The sound has indeed been remastered and remixed and the disc has 18 unreleased minutes compared to the original 1988 release.   The tracklist : 1. Main Title (2:25) 2. Reunion (2:15) 3. Good[...]

According to d2 (D Squared), a studio dedicated to high-quality mastering, engineers Dan Hersch and Dave Schultz worked last year on the score for Cocoon: The Return. It is therefore quite possible that a new edition of this music will be forthcoming in 2016. Based on the film there are nearly 20 minutes of score left off of the original Varese Sarabande album published in 1988. [...]

In 2013 we have definitely been spoiled by Intrada, with three James Horner albums: after the vibrant and unpublished In Country, the valiant and percussive Clear and Present Danger, here is the emotional and sensitive Cocoon. This is the perfect opportunity to revisit this outstanding music composed at the beginning of the Maestro's career, and look at the new elements of this edition.   "There is a before and an after Cocoon because Steven Spielberg loved this film and my music. My career really took off with Cocoon and An American Tail. I walked into the Hollywood tradition at that time "[...]

© jazzbluesclub.com William E. "Billy" May (1916-2004) was a composer, arranger and trumpeter. He composed for film and television, especially The Green Hornet in 1966 and the theme of Batgirl in Batman in 1967. He orchestrated Cocoon and its sequel, among others. He is also the author of arrangements for many stars of variety, such Frank Sinatra, Nat "King" Cole, Ella Fitzgerald and Bing Crosby. As a trumpeter, he has recorded several songs in the 40s with Glenn Miller and his Orchestra and Charlie Barnet and his Orchestra. Source: Wikipedia   [...]