WOLF TOTEM: A PREVIEW OF THE SCORE 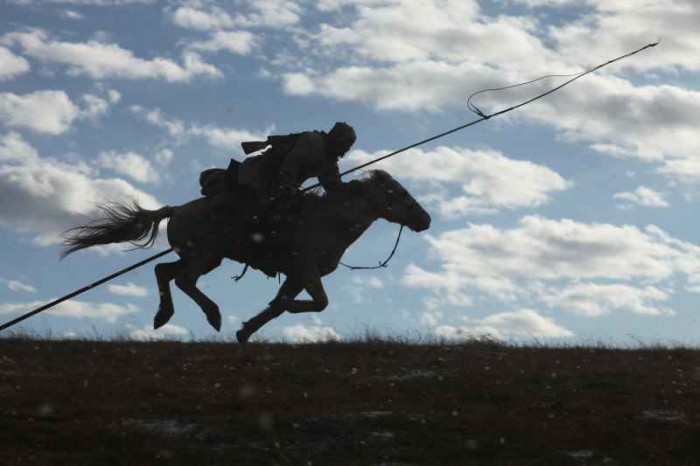 A voice pierces the silence. And what a deafening silence it has been for more than two years since The Amazing Spider-Man and For Greater Glory. James Horner finally returns to cinemas with strength and panache. Wolf Totem is a new feather on Horner’s already well-stuffed cap, a new shining star in the world of music.
Rest assured that if one day a Horner score disappoints us, we will state it plain and clear. We’ve had ample opportunity to sample this score and are confident that, upon its release, Wolf Totem will be a rich, multifaceted album, alternating strong moments of fear, sadness, happiness, action, redemption… In short, everything we think a music lover loves to live and feel when spinning a film music album in his CD player. But it does not stop at the elements that distinguish between a boring and an exciting disc. Indeed, the album also has a story to tell. It will tell us the story of Jean-Jacques Annaud’s film or the story that will crystallize inside your mind as you listen to the many beautiful and poignant notes. In short, get ready to be swept off your feet!
Spoiler alert: if you want the pleasure of discovering the film and its music yourself, please refrain from reading the following paragraphs.

A voice pierces the silence

A voice of pain, the perfect incarnation of the suffering that characterizes the two years spent in Inner Mongolia by Chen Zhen, a young student from Beijing sent to educate a tribe of nomadic herders. The celli are interspersed between each vocal phrase and emphasize the gravity of the protagonist’s plight, at which point Horner introduces the score’s theme. The melody is an unadorned expression of the epic and tragic adventure that is about to unspool before our eyes. Before long, it is picked up by a Chinese violin (as was evident at the 1:07 mark in the trailer) before unveiling its second part, a romantic flourish in the composer’s best tradition. It’s the kind of flourish we cherish and hope to find in each new score (and which can be found at 1:20 in the trailer). The arrival in Mongolia is set to a musical passage combining synthesizers and traditional instrumentation, very nearly the only appearance of the folkloric aspect in this new great symphonic score by James Horner.

The Wolf: a feared and revered creature

When Chen Zhen decides venture off the beaten track, he comes face to face with the region's pack of wolves. The fear is expressed by electronic elements not unlike the first part of Braveheart’s famous Revenge cue, when William Wallace slowly walks up to the English fortress after the assassination of Murron. The reference is not without meaning, because we now see two men on horseback riding to face a great many dangers. As the wolves gang up on the young man, the tension kicks up a notch. The electronic elements give way to brilliant orchestral atonality. Shades of György Ligeti (who once was James Horner’s teacher, lest we forget) are present in this scene, in which the character walks to certain death, the music also recalling Ambush from Clear and Present Danger (1994) or the end of Death of Titanic (Titanic -1997).
Fortunately, Chen Zhen’s life is spared both by the wolves and by the spirit of the steppe. In the midst of a moment of spirituality, he sees a vision in the sky. This magic moment, illustrated by strings and synthesizers recapture, in a way, the last notes of Field of Dreams: that final shot where the camera tilts up, revealing the luminous lines drawn in the dark by endless rows of headlights headed to the baseball field.
The next scene reveals Bilig (the eldest of the gang) and Chen Zhen observing the wolves as they hunt and await the right moment to attack gazelles. Horner scores the anticipation with slow string movements. When the wolves prepare to strike down, percussion supports increasingly agitated strings which explode into a fury as the wolves rush towards their prey. The energy produced by the strings reminds us of To The Roof in John Powell’s The Bourne Supremacy (2004). 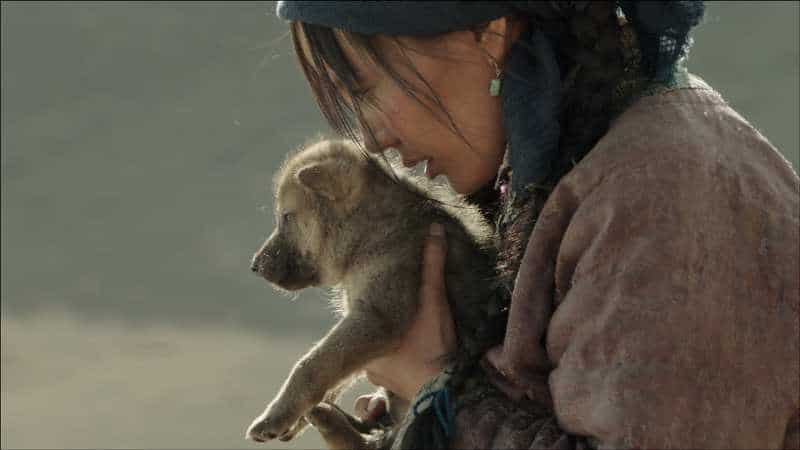 The killing of wolf pups ordered by the central authority results in two grueling scenes that James Horner scores with admirable restraint. For the first, he uses an intimate trio of harp, flute and strings. In the second scene, when Chen Zhen unwittingly causes the death of the wolf pups, James Horner laments the moment with a heartbreaking sentimental theme. Heavy with sadness, the strings condemn the injustice connected with the massacre of such innocent little creatures.

Nine minutes! That’s how long this gargantuan piece goes on, depicting the snow storm that takes place midway through the movie. Snow, a frozen lake … references to Sergei Prokofiev’s Alexander Nevsky abound. James Horner references the famous work in his customary spirit of respect, continuity and progression. To start with, the reference is subtle. Secondly, it is relevant in these circumstances. And thirdly, it is not redundant. Ominous brass announce impending disaster as Annaud paints a surreal image of two horses running on the horizon. The snowstorm rages to the sound of The Perfect Storm (2000), an understandable reference. Then the cavalcade of strings and brass runs for two long minutes before a slight lull. The cue then segues into an obsessive string ostinato and a statement of the main theme that sounds both heroic and desperate. The cue’s percussion-laden end leads us to yet another variation on Horner’s omnipresent four-note motif.


The hunting of wolves

This cue of anthology caliber is followed by quiet moments that develop the growing bond between Chen Zhen and his wolf. The main theme matures, much as this little wolf, just waiting to grow up. These are the last carefree moments, as brass and strings soon remind the characters of the threat the wolves face. A lack of food inevitably pushes them closer to populated areas and livestock. Before long, they launch a night attack on a herd, Horner adding to the moment with dark trombones and eerie string ostinatos, portraying the destructive nature of the pack. 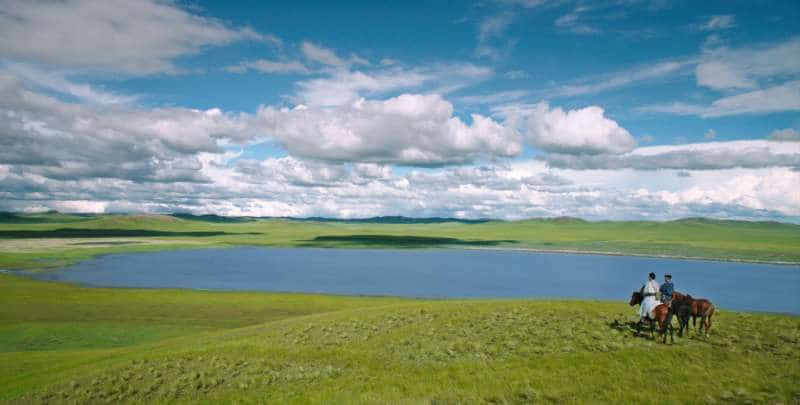 James Horner invests himself heavily in the final scenes as men go on to hunt the wolves. A touching string movement accompanies a wolf couple that would rather commit suicide than be killed by bullets. The pursuit of the pack leader is scored in what we think is one of the most incredible pieces the composer has ever given us. Words cannot accurately express the different emotional states the three following cues go through: six minutes of pure tension, fear, anger, heroism, epic grandeur, compassion, sadness and contemplation. It’s breathtaking music.
The final cue is cut from the same cloth. A majestic horn solo announces the final and vibrant statement of the main theme that plays for several minutes and then reveals all its emotional power.

This beautiful trio that bears testament to the musical sensitivity that James Horner now displays freely and without constraint. His very personal style, his implacable romance seem to express themselves in complete freedom. This is music born out of artistic freedom and therefore is utterly sincere. It’s as if Horner never needed to negotiate the treacherous waters of studio meddling. In the face of such an outburst of musical emotions, it is very hard to be picky and critical. The longer we listen to James Horner’s music, the more we welcome his music like a gift from heaven, a gem that sparkles just a little more every time we listen to it.
Photo credit: © China Film Group / Reperage 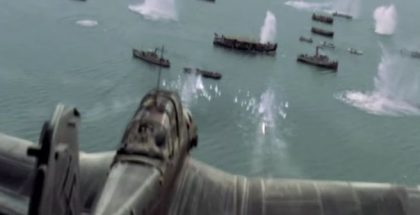 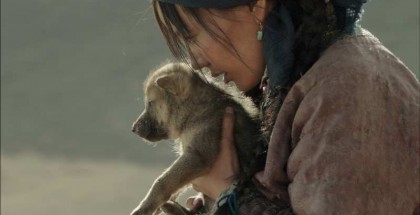 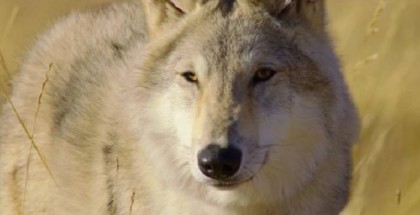