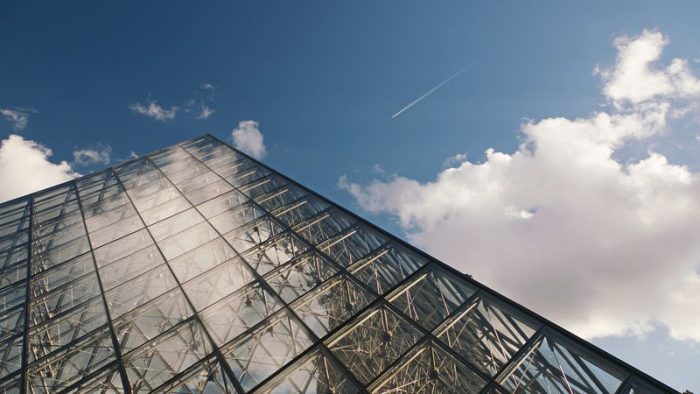 A little more than two years have passed between learning of James Horner's involvement with Living In The Age of Airplanes and actually having an opportunity to listen to his score. The film had been released in fifty IMAX theaters since April 2015, with a lot of positive feedback to be found online. In recent days we have previewed the film and its bonus features to be released on Blu-ray, DVD and Digital HD on October 25. The James Horner soundtrack album will be released worldwide on iTunes the same day.
In this article we will share with you our first impressions on the film and its music.

Living in the Age of Airplanes, the latest film by Brian J. Terwilliger (One Six Right: The Romance of Flying – 2005) was filmed in 18 countries across all seven continents. Those expecting to see hundreds of aircraft during the 47 minutes of the documentary will be disappointed. Indeed the film focuses more on the theme "Living in the Age" that "Airplanes" have provided us in our society. It evokes all that we can experience and admire since the development of aviation. Everything that aviation brings to our lives. This angle of approach is judicious because all humans alive now have lived in the time of aviation, and it is difficult to comprehensively understand the benefits of this revolution that our ancestors had never known. One of the great qualities of the film is the clarity of its theme and that it establishes itself as a perfect synthesis of the positive aspects of aviation. The negative aspects such as globalization and the environmental impact are indeed not explored. In a sense the film avoids the pitfall of being too demonstrative, and presents the facts and leaves the spectator to judge they beauty or the absurdity of the situation. This film is a celebration of the advantages of flight, and this is a very intelligent bias from the director Brian J. Terwilliger.
Staging is incredible. Each sequence hides a huge preparation work. Nature, cities and airplanes are shown at their best. Everything is done to provoke awe and bliss. Some of the technical challenges behind the film are explained in the DVD / Blu-ray extra features. This is absolutely a movie to watch. 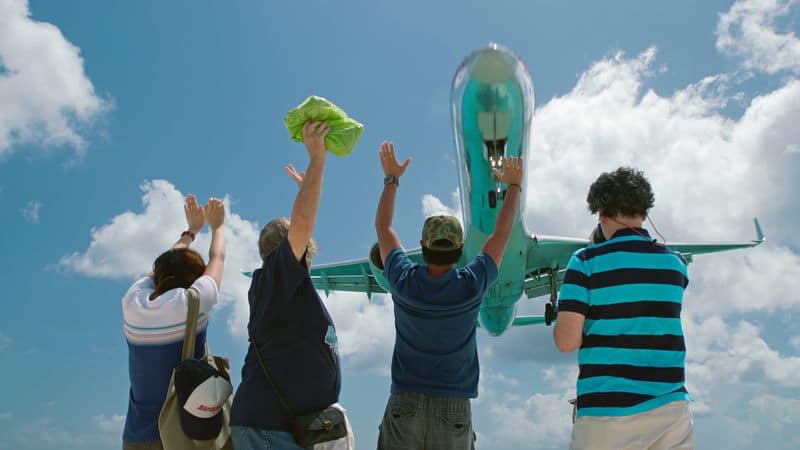 We are not going to beat around the bush: it's also a movie to hear. Harrison Ford's voice and James Horner's music are two hosts and essentially the film's two stars who accompany us superbly throughout the flight.
Music is omnipresent! Of the documentary's runtime of 47 minutes there is actually 45 minutes of music! The silences are rare. And you imagine a great deal of this score plays on all aspects: narrative, illustrative and emotional, and present a wide variety of sounds, rhythms and moods, not to bore. 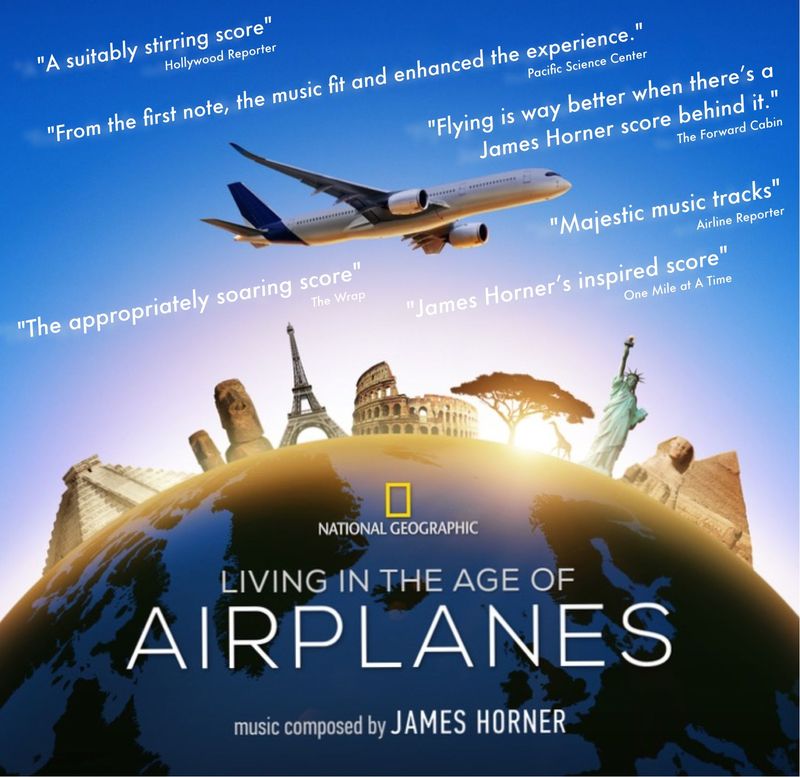 Comparing excerpts published last July on the official website and the music in the film, we can say with near certainty that all music will be present in the digital album.
What a pleasure to hear the multiplicity of colors and textures in perfect harmony with the images! It becomes difficult to sum up the score in a few lines.
Let us examine a sequence of 7 minutes which retraces the evolution of transportation since the beginning of civilization and the arrival of Homo sapiens. There are 200,000 years, and an overview of magnificent places to a glorious sound reminiscent of "Climbing Up Iknimaya – the Path to Heaven" (Avatar), the brass of the salsa style track that accompanies each item that comes alive on the screen, a piece of four minutes quoting Philip Glass to accompany time lapse scenes recalling Koyaanisqatsi. It is fascinating to note that the quote really began when microprocessors appear on the screen. Microprocessors already present in 1982 in the film by Godfrey Reggio to put in parallel the freedom of citizens and those of electrons in an electronic circuit.
We simply cannot ignore the sensational final sequences of the documentary where James Horner offered incredible music that is both powerful and touching.
Note that two tracks (17 & 18) presenting alternative versions will be present at the end of the album with a total duration that will reach 50 minutes.
Track 17 – Living in the Age of Airplanes – Original Soundtrack by James Horner

© 2016 National Geographic. All Rights Reserved.
In summary this music is a true dream, easily accessible to all and it provides a very pleasurable listening experience. It's hard not to fall under its spell. Awesome!
Note that we can see James Horner in 2 of 12 extra features that will be offered in the DVD / Blur-ray.
First in FLOWER SEQUENCE "DECONSTRUCTED" where we can see the recording sessions of the salsa-style track. James Horner appears with Jim Henrikson when viewing the scene that accompanies the piece. 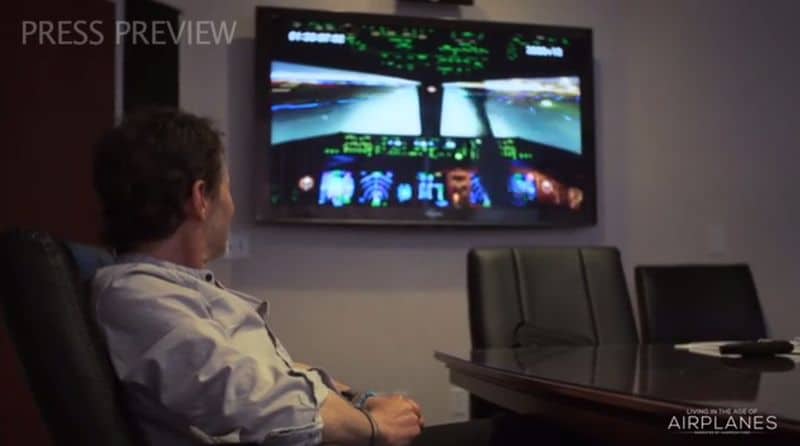 Then in IN-FLIGHT PREMIERE which features the world premiere aboard an Airbus in April 2015. James Horner is present throughout. This bonus is dedicated to his memory. 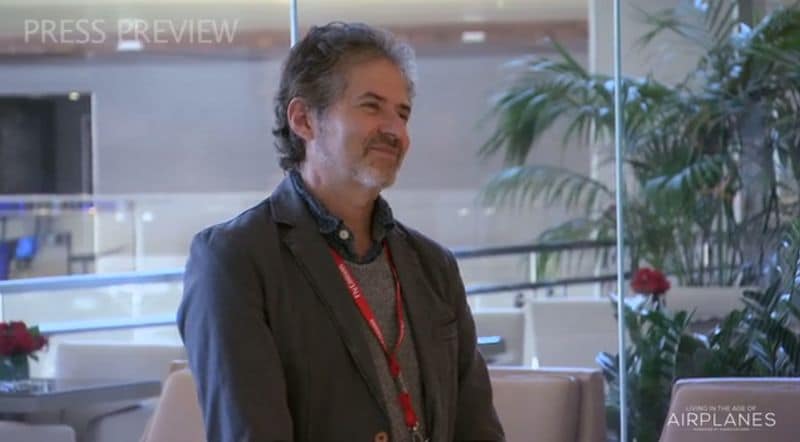 We will return soon with more details on this extraordinary score including an exclusive interview with Brian J. Terwilliger.
Link to the official website, where 30-second excerpts of each track (untitled here) are available:
airplanesmovie.com/soundtrack

LIVING IN THE AGE OF AIRPLANES: SPECIAL FEATURE WITH JAMES HORNER AND NEW EXCERPTS