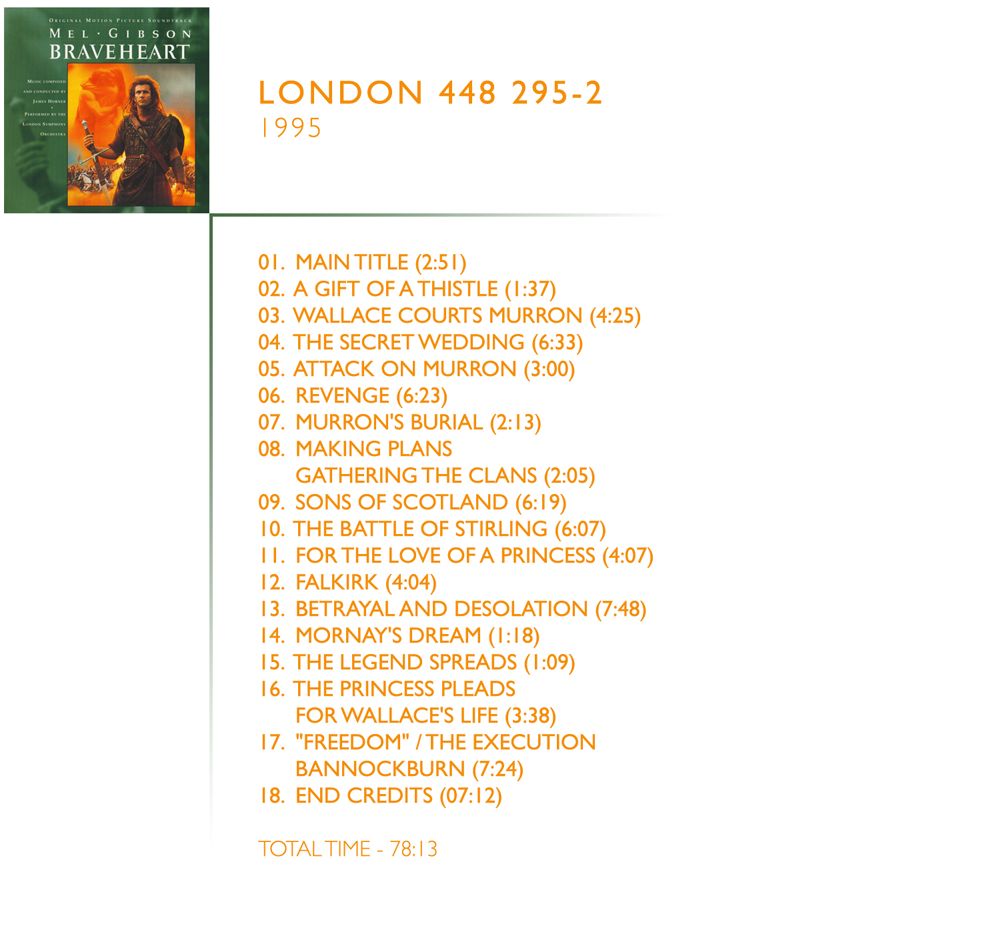 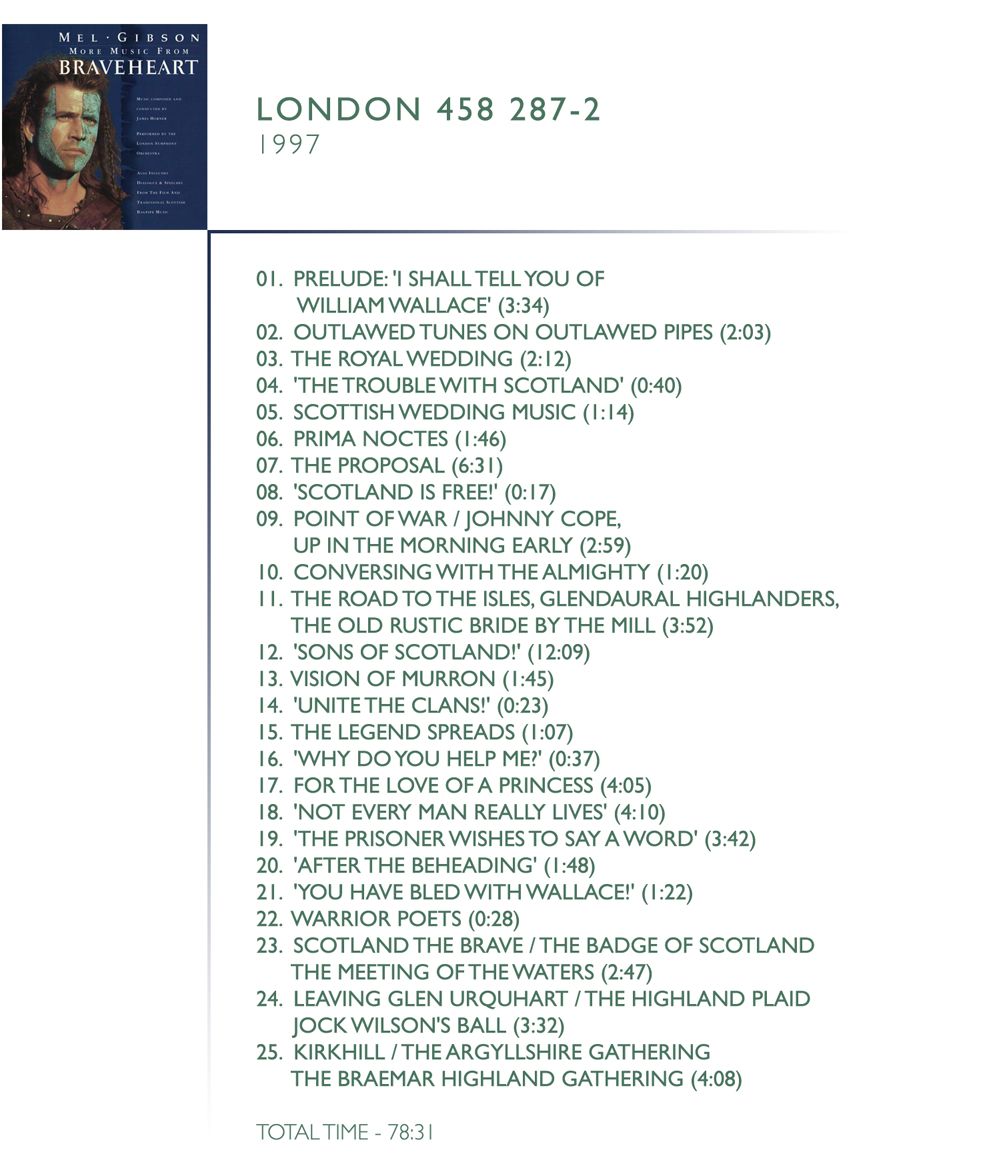 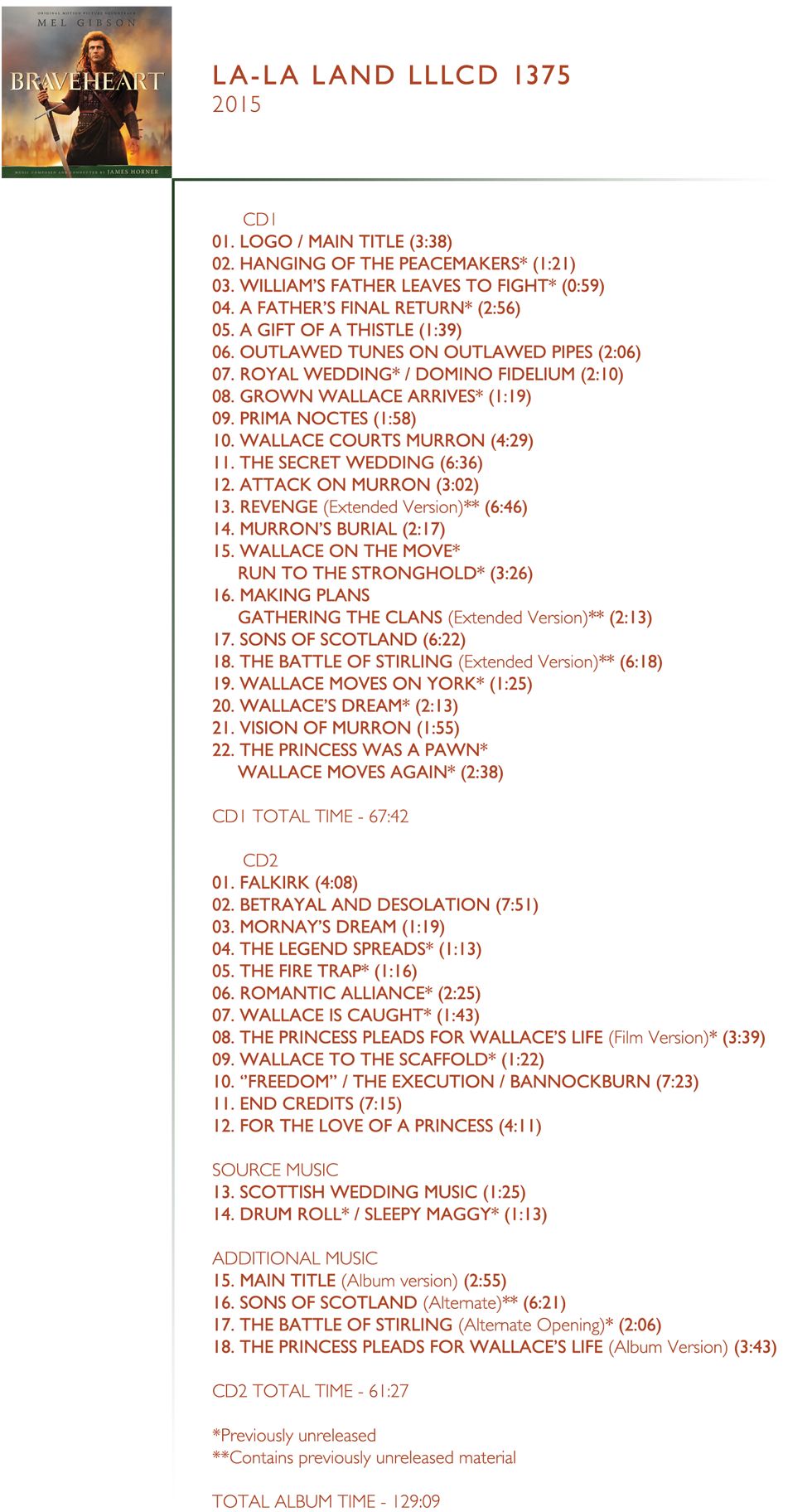 Second collaboration with Mel Gibson after The Man Without a Face.
Soundtrack nominated for an Oscar in 1995 with Apollo 13, and for the Golden Globes and BAFTA awards.

A few days after the death of James Horner, Robert Folk had suggested on Facebook the idea of producing a tribute concert bringing together his closest collaborators. Three and a half years later, this concert finally took place, thanks to Avex Classics, already responsible for Titanic Live and Aliens Live.   Vocalist Clara Sanabras, who worked with James Horner on For Greater Glory (2011), and legendary Irish bagpiper Eric Rigler (Braveheart, Titanic) were on stage. The collaborators Simon Rhodes, faithful sound engineer since 1998, and Joe E Rand, musical publisher on about thirty projects, were among the spectators. Sara, wife of[...]

Whenever we stumble across new recordings of James Horner music, we wonder: why bother? If it ain’t broke, don’t fix it. Re-recordings have invariably been a mixed bag, ranging from the good (Collage: The Last Work) to the not-so-good (the 2011 Silva Screen album). Now Dan Redfeld and BSX bring us a new compilation for solo piano. Right off the bat, it is impossible to compare full symphonic recordings and interpretations for solo piano. No fewer than 15 of the Maestro’s scores are on tap here, and as explained by Dan Redfeld, it was obviously necessary to set aside such luxuries[...]

The interview with James Horner recorded on March 1, 2001 with Charlie Rose as part of the promotion of the film Enemy at the Gates is finally available. The composer covers several subjects during 19 minutes: His passion for film music, the role of film music, the new generation of directors, Titanic, Jean-Jacques Annaud, Braveheart … The video also features a short extract from the recording session of Enemy at the Gates.     "I think it-- for the first time I felt that the music was supporting something bigger than the music that had a more profound effect on an audience than just sitting[...]

In the months that have passed since James Horner’s tragic death last June, already several tribute concerts have been performed around the world. These events serve both to preserve the composer’s legacy and also remind us that Horner’s body of work now fully belongs to the history books of music. One of the first concerts that was announced and performed took place in Dublin in September. Performed by the RTE Concert Orchestra, conducted by the well known conductor David Brophy, the concert offered several highlights from Horner’s career. We were fortunate enough to be invited to one of the rehearsals,[...]

"Every man dies, but not every man really lives." William Wallace – Braveheart – 1995 Among experts, Mel Gibson’s Braveheart is not exactly renowned for its historical accuracy. Screenwriter Randall Wallace – no relation – avowedly devised the narrative not as a faithful period piece but rather as a vehicle for the values and ideas embodied by the protagonist. In fact, the general thinking is that if reality is the realm of documentary, art in its many forms is a dramatic interpretation of it. A dramatist first and foremost, James Horner follows suit, focusing on the emotional core of the story rather[...]

2015 will soon come to an end, leaving the world without one of its greatest musical talents in James Horner halfway through on June 22, 2015.   One month prior, La-La Land Records released an expanded and remastered album for the 1993 score to Searching For Bobby Fischer, and of course James Horner's output at the time was going strong with his double concerto Pas de Deux, and the Chinese/French co-produced epic, Wolf Totem.     Looking back as we close out November, we gratefully received two posthumously released scores from the films, The 33 and Southpaw, soon after James Horner's passing. As the year[...]

29 April 2015. With host Tommy Pearson and a small audience, an important 75 minutes was to unfold. It is disheartening to note that this, a typical but always insightful interview with Tommy Pearson, would be the last interview our late maestro would give before his sudden passing on June 22, 2015. With this in mind, the angelic manners of James Horner's conveyance of thought are ever more heartbreaking as he describes some of his career highlights and passions to Tommy and the audience. His wonderfully unique way thinking and speaking those thoughts will be as sorely missed as the mystical[...]

Saturday, January 31, 2015. 17:00. For this particular episode of "Saturday Night at the Movies" for Classic FM, Tommy Pearson indulged in a conversation with James Horner in the summer of 2012, at his home in Los Angeles. Contained within the two hour running time is a well thought out, in depth and intelligent conversation between two people... one, a passionate music lover, the other, a true genius of the modern art of music composition and its magical ability to break and heal our hearts and souls. In this quiet conversation, James Horner gives us insights into how he began his film[...]

Wednesday, October 2, 2013, Vienna. Around 3pm, James Horner arrived at the Max Reinhardt Seminar with Varese Sarabande executive producer Robert Townson and Dr. Sandra Tomek, Managing Director and Artistic Producer of Hollywood In Vienna.     For an hour and twenty minutes, before an audience of 200, the composer answered questions from Robert Townson and the public. The conference featured five video clips from the following films: A Beautiful Mind (Creating "Governing Dynamics"), Braveheart (A Gift of a Thistle), Legends of the Fall (The Ludlows), Avatar (Jake's First Flight), and finally Titanic (Rose). James Horner's emotion during each sequence, the precision of[...]

Aliens - Two-Disc Collector's Edition [Dvd 2004] Alien Quadrilogy [Dvd 2004]   Documentary title: The Final Countdown Sequence time: 9'22 James Horner reflects on the difficult conditions in which he had to compose and record the soundtrack. He says that when he arrived in London, the film was not completed. He therefore composed 97 minutes of music within 15 days. The aging equipment during recording sessions, sleepless nights and icy relations with producer Gale Anne Hurd, are all explained in this documentary. © 20th Century Fox The Amazing Spider-Man - Four-Disc Combo [BLU-RAY 3d / Blu-Ray / Dvd / Ultraviolet Digital Copy] (2012) The Amazing Spider-Man - Three-Disc[...]

The official site on Tony Hinnigan, James Horner’s faithful collaborator since Willow, has embeded a video player device, which allows us to hear and see the artist more easily. Thus, many sequences have been added. This is an opportunity for us to introduce you to this site and to advise you to have a look at it: www.tonyhinnigan.com. News Tony Hinnigan recently referred to the concert at the world premiere of Titanic 3D as well as recording sessions of For Greater Glory. Movies There are very interesting anecdotes about the various films in which he participated. These films are so far listed up to[...]

By Irene Young, via Wikimedia Commons Alasdair Fraser is worldwide recognized as one of the finest Scottish fiddle players. He participated in more than one hundred TV and Radio shows in the UK and the USA. He played for the soundtracks of several major films such as The Last of the Mohicans and Titanic. Alasdair released several critically acclaimed albums as Dawn Dance (1996) and Legacy of the Scottish Fiddle, Volume One (2001) and he contributed to over 50 albums as a guest artist.   Official Site: alasdairfraser.com            [...]

© Bearmcreary Eric Rigler is an American player of uilleann pipes, great Highland bagpipes and tin whistles. He plays with the band Bad Haggis and participated in many soundtracks. He has been described as "the most recorded piper of all time." Source: Wikipedia     [...]

Georges Biard [CC-BY-SA-3.0], via Wikimedia Commons Mel Gibson (born January 3, 1956) is an actor, director, screenwriter and film producer. He is one of the most profitable film actors with the Mad Max and Lethal Weapon series. Two of his achievements, Braveheart and The Passion of the Christ were great successes. He won numerous awards including an Oscar and a Golden Globe for Best Director for Braveheart in 1995.   Source: Wikipedia   [...]