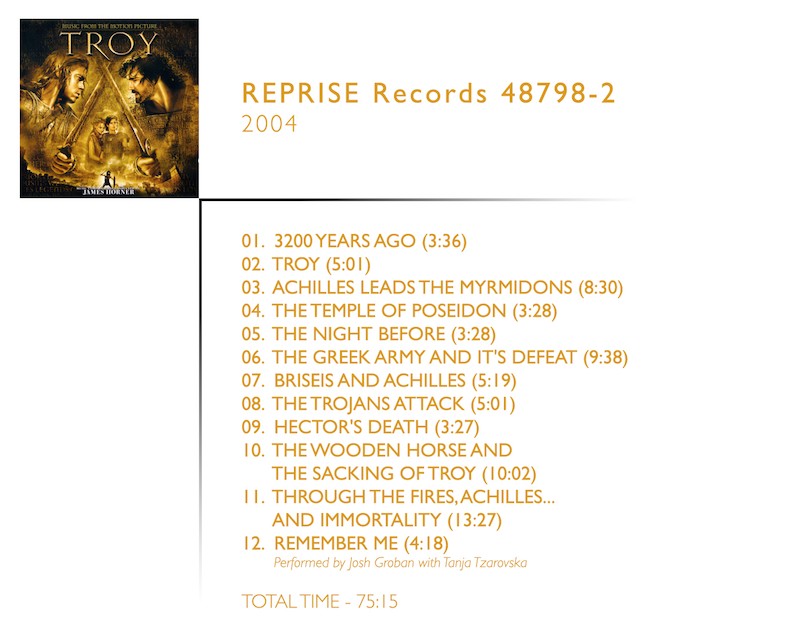 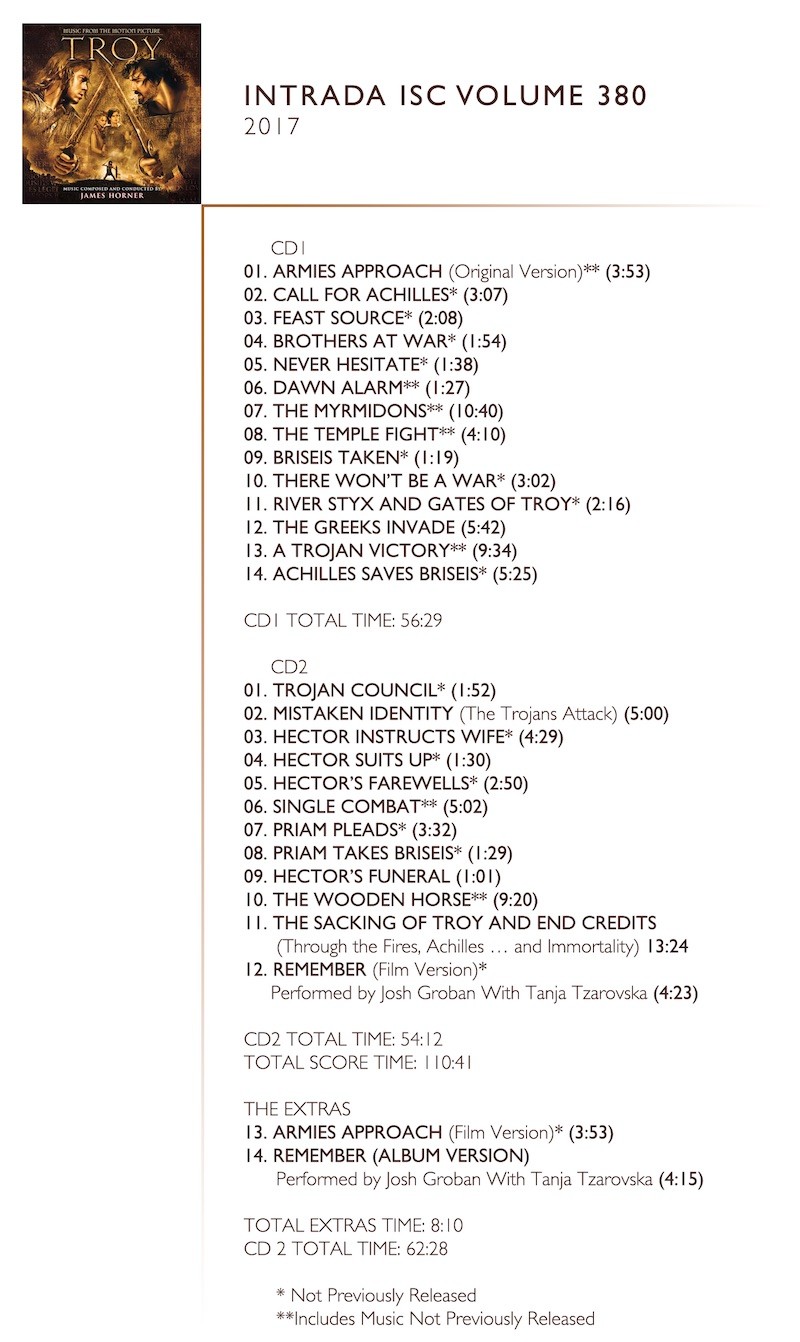 The end of 2017 was marked by the expanded editions of Troy (2CD) and Titanic (4CD). After the interview with James Horner, who plunged us into the heart of the score composed for Wolfgang Petersen’s film, we publish the words of Troy’s two voices: Tanja Tzarovska and Josh Groban.   CF) Why did you take on Troy the moment James Horner asked you ? JG) I’d have to be crazy to turn down an offer to work with a musician as renowned and as in demand as James Horner. In Hollywood, everybody knows everybody and David Foster was always going on about James Horner[...]

Now that La-La Land Records has released a behemoth four-disc set that pretty much closes the book on James Horner’s Titanic, we publish an interview given by the composer to Cinéphonia Magazine in 2005. Again, please remember that the original interview tapes have been lost and so for this English text we only had the French publication to go by. As always, we have tried to stay true to James Horner’s voice.   Cinéfonia Magazine: What do you remember today of the adventure that so profoundly impacted both the movie industry and film music ? James Horner : It’s always nice to go back to[...]

To celebrate the release of Troy in 2 CD edition by Intrada (see our exclusive review here) we publish a archival interview in English of James Horner published in 2004 in the French magazine Cinéfonia. These are actually two interviews that we merged for this publication. Dive into the creation of Troy! Recall: The Words of James Horner is a series of articles intended to republish some twenty interviews Didier Leprêtre and Jean-Christophe Arlon conducted between 1997 and 2006 and published only in French in the magazines Dreams To Dream and its successor Cinéfonia. Unfortunately, the English-language audio tapes of the interviews[...]

Thirteen years after the film's release, a limited edition 2-CD set of Horner’s epic score for Troy is now available from Intrada. In 2004, when Horner was announced as the composer of Wolfgang Petersen’s Troy, another composer was working for more than a year on its music. But once two test-screening audiences found Gabriel Yared’s score too ‘old-fashioned’, producers turned to James Horner, who previously scored Petersen’s The Perfect Storm (2000), to write a replacement score for the picture. The challenge was daunting, as Horner only had ten days to write and record the music for the film. With more than two[...]

Everybody has a right to judge James Horner's music and not to like it. Generally this disenchantment is reflected in terribly pejorative verbs such as dig up, borrow, pump, copy, plagiarize ... The kind of actions the composer is accused of, putting forward the idea of ‌‌a lazy craftsman's poor and sloppy work: the pickaxe as an unsubtle tool, borrowing as a sign of weakness, pumping for large quantities, copying for the lack of creativity, plagiarism as a lack of respect towards the other composers. It is difficult to go against this phenomenon because the allegations are undeniable: Indeed, it is indisputable[...]

There are names you will often run into on James Horner’s album covers: Ian Underwood, Tony Hinnigan, Simon Rhodes ... For 25 years one of them has been present almost every time, proof of a collaborator who has become indispensable. James Horner speaks of him thus in the liner notes to the soundtrack album for Troy: "my wonderful friend without whose guidance and wise counsel I would be lost." This close and faithful staff member is the legendary music editor, Jim Henrikson. Prior to working with James Horner, he participated in projects for television (Star Trek: The Original Series) and classic[...]

To coincide with the opening of our collaboration section, we wanted to focus on a profession that is rarely promoted: orchestrator. We had therefore the great pleasure of interviewing Jon Kull, who worked with James Horner on scores including Avatar and The Amazing Spider-Man. The delicacy of his answers sheds light on the creation of orchestrations in film music.   How did you become an orchestrator in Hollywood? What is your background? After earning Bachelor's degrees in Composition and Piano Performance at the University of Colorado, I got into the Film Scoring Program at the University of Southern California. Along with being a[...]

Tanja Tzarovska is a Macedonian singer and songwriter. She performed on the soundtrack to The Passion Of The Christ by John Debney. Her first album No Record Of Wrong was released in May 2011. Source : Wikipedia       [...]

By christopher simon (originally posted to Flickr as IMG_0106) [CC-BY-2.0], via Wikimedia Commons Joshua Winslow Groban (born February 27, 1981) is an author, composer, and American interpreter. At the end of 1998, the young Josh (17 years old) was introduced by his vocal coach to David Foster, a producer, arranger and composer of world renowned music. Thus, began an international career consisting of successful albums (Closer) and performances at prestigious ceremonies (Olympics, Oscars, Superbowl). He particularly performed with Lara Fabian on the song For Always, in the soundtrack to AI: Artificial Intelligence in 2001 and the song Believe, in the film The Polar Express[...]

© Barry Mann & Cynthia Weil. mann-weil.com Cynthia Weil (born October 18, 1940 in New York) is an American songwriter. She is known for having written many songs with her husband Barry Mann. Since the 1960s, she has been one of the most famous musically creative and celebrated people.   Official site: mann-weil.com Source: Wikipedia     [...]

Conrad Pope is known in Hollywood for his rare musical skills and as a refreshing and emotional musical composer. He has participated in over a hundred films in varied genres and budgets. With a classical background, he studied at the conservatory in New England, Princeton University and Europe. He worked as a music supervisor for composers like John Williams, Alexandre Desplat, James Newton Howard, Jerry Goldsmith, James Horner, Alan Silvestri, Danny Elfman, John Powell and Hans Zimmer. Official site: ConradPopeMusic   [...]

Wolfgang Petersen (born March 14, 1941) is a German director and screenwriter. He was twice nominated for an Oscar in 1981 for his film Das Boot. He was successful at the box office with In the Line of Fire (1993) starring Clint Eastwood, The Perfect Storm (2001) with George Clooney and Troy (2004) with Brad Pitt. Source: Wikipedia   [...]